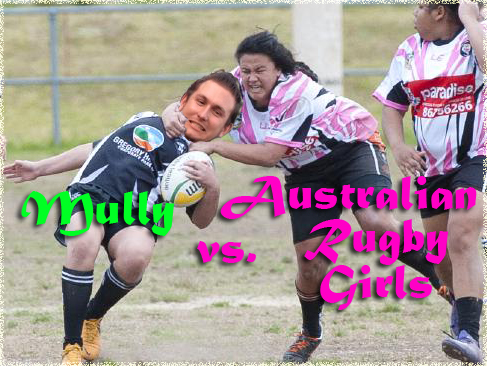 First off I have to say UP! UP! Cronulla. What an amazing game that was to see live, as the final whistle blew the excitement and noise in the stadium was off the charts! This isn’t a footy blog so that’s enough about that. This is the next instalment of Mully Dates. Unfortunately having ran out of data I couldn’t live tweet it out but not to worry I took notes.

After flying into Sydney and getting patted down by ozzy boarder security it was off to Kings Cross for a well-deserved beer. After pub hoping for a bit me and the boys spotted the perfect pub. There were about a good 30-40 girls all dressed up as maids, policewomen etc. and no guys?! WTF. I asked one of them where all the penises were. “We’re on a double hen’s night” one of them replied in a thick ozzy accent. “So why are you guys drinking at this seedy place?” I asked. With a smirk she replied “upstairs is a male strip club mate”. Well fuck me dead I had found the perfect place to pick up girls, the fucking holy-grail!! The girls went up to the strippers, got themselves all bloody hot and heavy and ol’ mully waited downstairs to swoop in! Well the first horde of girls went up and half an hour later came down but scurried off into the night “fuck sake!” I thought. I asked the bartender if there was another show later on. Luckily another show was scheduled in an hours’ time.

After a few more beers the next horde of ladies came into the bar, these ones were noticeably fit with muscly legs bulging out. “Fuck it’s a bunch of cross fit muppets’’ I thought. But after chatting to them they revealed that they played rugby league, nice! All these beers had me in dire need to drain my vain, so I headed into the toilet but, just like a fucking league game, I got intercepted by two of the big beefy girls. They shoved me into the ladies toilet and began giving me the best bj I have ever bloody had, they sucked my balls better than any fucking vacuum cleaner ever has! Wanting to obviously get their end away after the strip show the big girls grabbed me and basically tackled me into a taxi “We’re going back to our room big boy” the biggest one scoffed. Once we got back to their room, they threw me onto the bed and begun getting unchanged. What happened next was a fucked up mixture between sex and a game of footy. They grabbed my willy as if it was a fucking gear shift, shoving it between their legs, once one thought the other girl had had enough of a turn on it she shoved her off and sat on it. This carried on for a good 40 minutes until I was drenched in ozzy girl slime. I bid them a good night saying I had to get back to my mates but these fuckers wouldn’t let me leave, tackling me back onto the saturated bed for round two! I eventually got away and back to where I was staying thankfully with only minimum bruising. Those ozzy girls like sex like they love their footy; sweaty and rough as fuck!