Waking up with a hangover is bad, but waking up and remembering what you did the night before can be the fucking worst – especially with the stench of numerous other peoples urine covering my jeans and shoes. Previously on the life of Mulligan I went on a double date to a water park (https://tattooedmulligan.com/2016/02/22/gettingwetdate-recap/ ) me and the blonde Canadian got on great but my mate Kurt wasn’t her mates cup of tea, which left spending alone time with the Canadian difficult. Luckily she agreed to another date with just me and her for this past Thursday and #BlondeCanadianDate was born!

Before any date it was time to peal back a few cold ones which on a hot day go down exceptionally well, after that it was a shit, shave, shower and the pre date wank/crank.

Once all of that was done it was time to ring a taxi. I fucking hate taxi’s especially here in Tauranga, they are always late and they don’t have a clue where they are going. This time was no exception, after ordering the taxi and getting an estimated time of pick up being 10 minutes these fuckers didn’t turn up for forty minutes, tossers. What made matters worse is that they stopped at every just turned orange light and pretended they didn’t know where to go, fuck sakes if I said take me to town I’m sure even a non taxi driver would understand where fucking town was!

When I got to the restaurant the Canadian was visibly annoyed for having to wait but while she was waiting she had sunken quite a few drinks, so it was almost a blessing in disguise as once I had explained what happened she planted a big hello kiss on my lips.

We ordered drinks and began chatting and joking resuming where we had left things from the previous date. I could tell she was also a bit tipsy as she immediately stated flirting with me by telling me she was moist. Moist is such a creepy word, whenever I hear it I picture sweaty underarms which came to mind when she told me that. 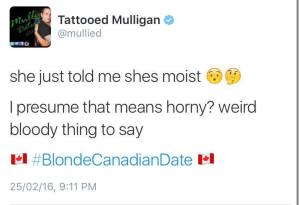 We continue talking about different things, I ask a lot about Canada which she is happy to tell me about. At one point she asks me if I know what a Canadian Goose is. My initial reply was a native bird, nope she gives me a clue what it is and after a quick google I find out it is something bloody disgusting!

You lay a girl down in the middle of the floor naked. you proceed to take a running start diving over her and shitting on her in mid-air. For full effect make a honking sound. – Urban Dictionary
After asking her if that’s what it is, she burst out laughing like a dying goat nodding her head, ” I can’t believe you hadn’t heard of it” she says between skunk laughs. She then brings up how Canadians created maple syrup claiming her and her friends have it on everything from pancake to penises which she says makes for an amazing blow job.

Dinner finally gets here with another couple of rounds of drinks, at this stage both of us don’t really need anymore, all she has been talking about is sex sex sex, which compared to our last date makes me think she is on her way to drunk city. During dinner it was time for her to quiz me and she asked if I was good at oral to which I said “if it doesn’t smell like an expired roll of fish sushi then yes I think I’m pretty good” this made the goat laugh come back in full force and by god she has a good set of lungs on her as she can laugh fucking loud!

She continues the sexual talking telling me she wants my willy for dessert but when she said that I didn’t think actually meant that she wanted it right there and then at the restaurant!

OHHHH SHIT!!! She just asked me outright if I want a shag.

As I walk into the bathroom she is waiting/pretending to check her makeup just in case I was someone else, we go into the toilet locking the door. We kiss for a bit then she sits on the loo and begins to give me a Canadian blow job minus the maple syrup. During the bj I look down and notice the entire floor  we are standing on is covered in piss which my jeans that were around my feet are soaking up, fuck sake. Too busy to do anything about it I continue to enjoy the oral I was receiving,. She finishes sucking on my Bonita banana and takes her undies off, she then bends over putting her hands on the dirty toilet and tells me to put it in, you don’t have to tell me twice.

I start thrusting back and forth, my feet splashing about in the urine puddle and then it happens, we both hear the door to the bathroom open. We both freeze as we hear footsteps sounding as if they were coming right for us, shit we are getting kicked out I thought. Luckily it wasn’t one of the staff coming to see what the hell we were doing it was just some female going into the toilet next to us. We continue to fuck as quietly as we can, we hear her pee stream begin, thinking that she is just peeing we shag on .Then the unthinkable happens – I hear a fart and then splash, SHES DOING A FUCKING POO!!!!! The Canadian doesn’t even give a fuck. She looks back at me as I’m standing there grossed out, “keep going” she whispers. Another fucking splash, but we keep going.Then the fucking stench begins to wofffle over, fuck sake. I pull my shirt over my nose as I try hard to cum so I can bail out of here, but my pre date wank is making it difficult. Another loud fart and a huge splash ensues, come on mully I think to myself we have to get the fuck out of here as the stench grows stronger. I finally cum as the lady beside us is grabbing for the toilet paper to wipe her arse after the massacre she has left in the toilet. We wait until she is finished and both leave the toilet at the same time. THAT WAS ONE OF THE WORST THINGS I HAVE BEEN APART OF.

We sit back down and quickly finish our drinks as my pants were soaked in urine. She began laughing about what had just happened “I wonder if that lady heard us” she laughed. I don’t know if she heard us but I bloody heard and smelt her destroy the toilet! We get up and say our goodbyes as we both grab different taxi’s going in different directions. Since the date I have made her promise that if we are going to have sex again (which I hope we are because the sex was great) it will be in a bloody bed this time!