If someone had told me before I started live tweeting my dates that I would end up going on a date with a gypsy, I would have shook my head and said bullshit. Now before you go shaking your fists at me and saying “there is nothing wrong with gypsies” I had a preconceived idea what a gypsy was from watching reality tv and films. But these New Zealand gypsies are cool fun loving people. We have the annual gypsy fair roll into town once every year, I hadn’t been since I was young so I decided to go. I went with my mates on Saturday as I wanted a new necklace. After browsing a few stands I spotted a fairly attractive women doing face painting outside of one of the wagons. After surveilling where she was working for 5 or so minutes I noticed she had no wedding ring and only two older people in the wagon which I presumed were her parents. After working up enough courage I approached her and asked if I could get my face painted, she looked up at me with a really welcoming smile on her face “what did you want me to paint” she said laughing. “How about your cell phone number” I said laughing, hoping that if she had a boyfriend or wasn’t keen I could point at my mates and say they dared me too. “Oh you are so sweet, how about I just give to to you” she said. Boom! That’s how you do it and now that I had her number it was time to set up a date.

We texted each other for the rest of Saturday, and before long I asked her if she would like to go out for a bite to eat on Valentines. She said she will asked her parents as when it’s the weekend she needs to make as much money as possible to sustain them for the next week. Fast forward to lunch time Sunday and I got the confirmation that she will be able to come for dinner, yay now let’s begin the #ValentinesDayDate recap. 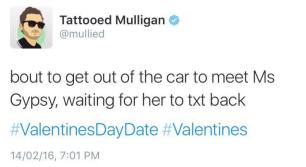 After a few drinks at my flat I got my flatmate to drop me off at a bar in Tauranga, not wanting to get out I waited in the car until she texted and said she was there. The first thing I noticed when I greeted her with a hug was holy shit she has just taken a fucking bath in incense sticks Jesus Christ it was some strong smelling shit.

She seemed like a really down to earth out going girl to begin with and then this happened. 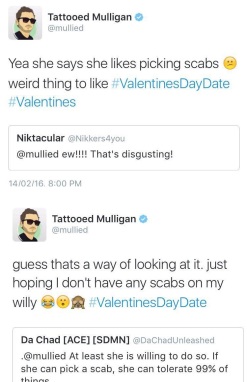 As I was rambling on about my tattoo’s she holds my arm looking at them and then sees something she doesn’t like (the scab) and just picks the fucking thing off. “Ewww yuck” I say laughing in shock, “yeah it was bugging me” she says smiling thinking sweet fuck all about it. Bugging her?! Who the fuck picks someone else’s scab off them on their first bloody date. Just as my scab started weeping dinner arrived and made me forget about the whole thing, I later found out she loved picking scabs. Weird. Dinner was nice we enjoyed a few more drinks until I decided to see if she wanted desert – and that’s when she said this that made me go as hard as a fucking rock…..

My dick began to grow and grow, “Oh I will call a taxi then” I said trying to play it off as casual as possible. “Hurry up” she whispered “I wanna fuck your brains out”. I have never wanted a fucking taxi to pick me up as fast as I did right then!

When we got to my house I went for a pee, I thought that I would have to put a movie on before we would get into playing hide the sausage but oh how wrong I was. As I approached the bed she undid my jeans and proceeded to give me the most amazing blow job, so good in fact I had to stop her at one point as I thought I was going to explode. She then told me to get naked and lay on my back and for the next half an hour she rode me like a fucking horse, it was amazing. She was amazing.

Later on Monday she texted me and said she had some good news; the gypsy congregation weren’t leaving until Tuesday now!! She told me to clear my schedule because she was going to cum, I bloody hope so! She brought a candle over and poured the hot wax on me, which kinda fucking hurt but at the same time turned me on so much. She then made me pour it on her…bad idea. She had a wee bit of fluff down there and instead of pouring it on her stomach I accidently poured it on the top of her vagina “ahhhhhhhhhhh” she screamed, that was the end of the candle foreplay. Apart from that the sex again was amazing, she really knew what she was doing on top. So that sums up my Gyspy Valentines Date, its safe to say I had a bloody great Valentines.