As much as I enjoy writing and sharing all about the good times I have had scoring girls and how I have gone about it, I have also had some shameful experiences. This next story happened back before I had tattoos and before I had sneaky ways to pick up girls, like pretending I was a tattooist.

I had just turned eighteen, here in New Zealand when you turn eighteen you can buy alcohol and go clubbing. I was still living with mum and dad in Tauranga so it was extremely hard to bring a girl back to my place and I had never actually tried to at this point.

I was in my final year of college. Half of my friends had already turned eighteen, they were raving how good going to town clubbing was so I was desperate to go. Finally it was my birthday and off to town I went. Back in these days the now closed Grumpy Mole night club used to pump. As I first entered the club it felt like a whole new world. Fake smoke mist had surrounded the dance floor and the loud obnoxious sound of the Black Eyed Peas pounded deep into my ears. I had never seen people dance in the club only in movies, it was so weird. You have all different types of dancer, the boy’s pack which is a bunch of guys dancing in a group searching around with their eyes on the lookout for girls. The next is the girl group, they dance in a group but usually they aren’t on the lookout for guys – they remind me of Zebras oblivious to the male lions stalking them. Then there are the couples, usually dirty dancing and kissing each other. I HATE these ones. Go home and have sex, I don’t wanna see you practically fucking on the dance floor! 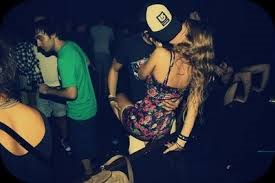 Anyway the dancing freaked me out so I went outside to the smoker’s area. I had already pre-loaded with a box of Double Brown beer before town so I was pretty happy. Suddenly I hear a squeaky voice yell out “Sean!”  It was my mum’s friend Carol. She came staggering over sloshing her glass of wine everywhere. She practically launched at me and gave me the biggest drunken hug ever. I saw my two mates giving me the thumbs up behind her back. “what are you doing here” she said half slurring her words. I explained to her I am eighteen now and this was my first night out. I’m not sure if this turned her on or what but she thought it was awesome that it was my first night in town and proceeded to take me onto the dance floor and dance with me.  A little about Carol – she is my mums friend from tennis. She is this lady in her mid-thirties; she has long luscious black hair and an amazing sporty figure. She is known for loving her wine and being a bit of a party animal.

We continued dancing and she finally bounced on me in this young club, shoving her tongue down my throat. All I could taste was cigarettes and the sourness of the wine she was sculling back. We continued dancing the rest of the night until 3am. I asked her what she wanted to do now. She asked if she could come back to mine, I reminded her mum and dad are home but she insisted she would be quiet so off to get a taxi we went.

We got home and started tip toeing down the hallway to my room. Finally we got into bed and started kissing. I went down on her, she must have completely forgotten about my parents being home because all of a sudden she started moaning so loud. All of a sudden I hear loud footsteps and bang! The door swings open and mum and dad are standing there. Mums eyes go from half asleep to as wide as golf balls. “SEAN!! What the hell do you think you’re doing!?” before I could say anything she recognised who it was there with me. “Carol??!!!!”  Walking over she grabbed Carol by the arm, ripped her out of my bed and began yelling at her. She eventually kicked her out, I quickly texted Carol saying I had ordered her a taxi at the end of the road. “You go to bed now, we will talk in the morning” mum said before shutting my door. In the morning Dad talked to me suggesting it might be a wise idea if I got my own place, mum never brought the Carol situation up again, safe to say they we not friends anymore. I didn’t care about that all I cared about was mum seriously cock blocked me, cheers mum!!!

One thought on “Sleeping with My Mums Friend….Almost”